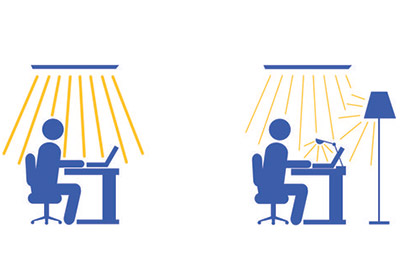 Once upon a time, office space was a combination of cubicles and file cabinets, computer terminals and conference areas. But changes in technology have helped transform the look and feel of the workplace. Current research and emerging practices suggest that attention to office lighting design can go a long way in making the office work better, feel more comfortable and invite greater collaboration.

Most workplaces are over-lit. The intensity of light cast on a surface is measured in foot-candles (fc). The Illumination Engineering Society of North America (IES) recommends a 30-50 fc range for ambient office lighting, but many workspaces are lit to 60 fc.

According to Jason Brown, Application Solutions Manager for GE Lighting, workspaces that are too bright may affect a building’s energy costs. Working closely with the IES, Brown has found that a “layered” design is a good solution to over-lit offices.

“A layered design is optimizing ambient, perimeter and task lighting to hit energy goals and save the most money with the best lifecycle cost, potentially earning LEED points, too,” Brown says. “Instead of giving everyone the same 30-50 foot-candles of illumination, light can be assigned to certain tasks.”

The California Lighting Technology Center and the California Energy Commission PIER Program studied office lighting and developed a layered lighting design based on the task/ambient concept. The organizations found that making LED-based localized task lighting the primary layer of light in offices resulted in a 50% savings in lighting energy and overwhelming user satisfaction.

Most workspaces today are over-lit. To avoid this, layer different types of lighting such as ambient and task lighting.

The ability to direct light where it’s needed is a key advantage of today’s advanced LED optical designs. For general lighting, new LED options offer dual benefits of aesthetics and efficiency. Recessed ceiling troffers like GE’s Lumination ET and BT Series LED lighting fixtures can improve the quality of the lit space when “on” yet appear free of a visible light source while switched “off.”

The U.S. General Services Administration recently evaluated the performance of occupant responsive lighting technology. Through the use of advanced lighting controls, calculated annual energy savings by site ranged from 27 to 63% with the variations being attributable mostly to the way space was used. Spaces where the tenant required illumination for variable levels of workstation occupancy showed the greatest savings while spaces where the tenants’ employees were at their desks most of the day showed the least. Surveys further demonstrated that occupants were generally more satisfied with the retrofitted lighting systems, noting they provided less glare and better quality light.

As organizations attempt to keep up with ever-changing technologies and evolving trends in workspace and lighting design, a professional lighting analysis is a sure first step for learning more about existing systems and options.