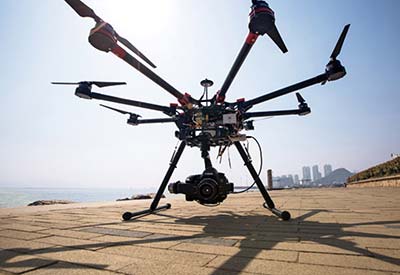 It’s safe to say that when it comes to drones, Edwin Leung is a fan. Well, more than a fan, really. As one of Hydro One’s health, safety and environment coordinators, Leung spends his days examining ways to improve the utility’s management systems.

In his free time, Leung is all drones almost all the time.

For nearly 10 years, he has volunteered during his winter vacations and other holidays with the United Nations and non-governmental organizations (NGOs) on ground relief efforts in places like Indonesia and the Philippines.

More often than not, these relief efforts involve the use of unmanned aerial vehicles – or drones – to survey storm damage and monitor the work on the ground.

Drones are increasingly appearing around the globe. So what roles do they play in the utility industry, specifically in Canada?

Leung and many others at Hydro One believe that drones not only play an important role in photographing and filming the utility’s assets, but that they could also be used to inspect transmission lines. Drones could improve safety conditions, as line maintainers wouldn’t need to climb towers for some kinds of inspections. As well, efficiencies would be increased because of faster inspections.

However, actually turning those beliefs into realities is a far greater challenge.

For the past several years, European and Asian utilities, as well as other services, have used drones of various shapes and sizes for first response efforts, photographing transmission systems and inspecting lines. In Canada? Only a handful of utilities use them. Part of the problem is that Transport Canada – the federal agency that governs Canadian airspace – has strict regulations for the commercial use of drones. 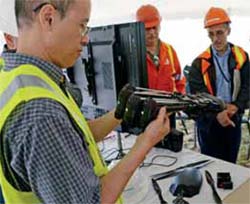 Leung checks out a drone at the Kleinburg Training Centre.

Regulations govern line of sight (maintaining visual contact with the drone), special permits and no-fly zones. And if you think Canadian utilities lag those in Europe and Asia, our American counterparts are even further behind. Due to stringent Federal Aviation Administration (FAA) restrictions, the use of drones by U.S. utilities is more of a dream than a reality.

Given his experience, Leung often acts as Hydro One’s expert on drones. He provides different lines of business with his input and information on the flying devices.

Last fall, Leung helped Hydro One secure its first drone for training purposes. Ralph Evans, Training Manager at the company’sKleinburg Training Centre, worked with Leung to secure the purchase of the flying machine. Made by DJI, the S1000 machine will be housed in Kleinburg and used primarily for photography and film shoots.

Hydro One will apply for a Transport Canada permit – also known as a Special Flight Operations Certificate – as the drone will receive expanded use at Kleinburg and other locations. Work to use drones to test Hydro One lines is also underway.

“We have the foresight and forward thinking to say that in order to modernize the grid, to make it safer and more efficient, we need to leverage research and development,” says Chong Kiat (CK) Ng, Director, Project Definition.

Hydro One hosted a two-day drone demonstration by the Electric Power Research Institute (EPRI) in Kleinburg last summer. Hydro One employees from different lines of business and representatives from a few American utilities watched vendors showcase their drones and perform line inspections.

The FAA would not give EPRI a permit to host the event in the U.S., so the organization looked to Hydro One, and ultimately Transport Canada, to see if it could host such an event. 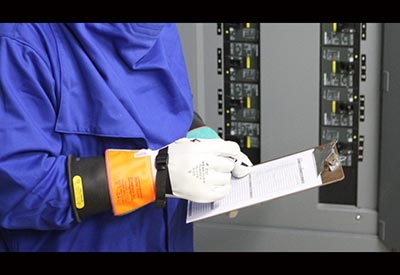